What is chronic constipation in children?

The definition of chronic constipation differs from one person to another. This is because constipation has to do with the frequency of bowel movement and different folks have different ideas about the number of times which they consider normal. While some consider it chronic constipation if they do not have a bowel movement at least three times in a week, others see it as having difficulty in passing out stools or straining to pass out stools. It is generally accepted that having difficulty in or straining to pass out stools when you feel the need is constipation. 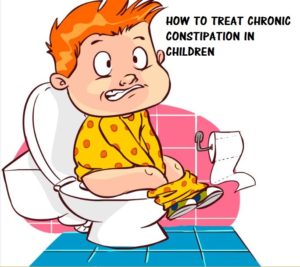 Constipation is a condition that disturbs both children and adults. Constipation in children can be quite painful to observe especially as a parent as one can literally see the difficulty in passing out stools in the child’s eyes. Chronic constipation in children generally begins when the child passes out stools less than three times in a week. This is still controversial and if you observe your child having difficulty passing out stools and at the same time complaining of aching stomach then you might want to start checking for other signs of constipation.

There is quite some myth about chronic constipation in children that can easily be confused with facts. Few of the myths are listed below and you should take them seriously as they are not facts.

#3myth: your child’s bowel movement should increase with age. This is not true. Research has shown that the frequency of bowel movement actually decreases as we grow older.

Causes of Chronic Constipation In Children

Since constipation is always linked to the difficulty in passing out of stools or the passing out of hard stools, it is believed that in cases of constipation, the intestines absorb more water from the food passing through the digestive tract, hence resulting in the formation of hard stony stools which is difficult to pass out of the body. This whole process can actually be linked to the brain since it actually controls the amount of water to be absorbed from foods in the intestines by directly controlling the hormones responsible for the process. More research is still be carried out to determine the actual causes of chronic constipation, especially in infants.

Symptoms of chronic constipation in children

Changing posture
Changing of posture is often a symptom of constipation in children. Most nursing mothers or caretakers often mistake and interpret this symptom as the child trying to have a bowel movement, but actually, the child may be constipated. Changing of posture may include clenching of buttock muscles, unusual dance like movements or standing on tiptoes and rocking back and forth.

Excessive straining in passing out stools
If your child is straining before being able to pass out stools, the child may actually be constipated. This should not be confused with actual difficulty in making the stools to come out. That can happen at one time or the other. When the child actually finds it difficult to make the stool come out after spending a lot of time sitting, then constipation may be the cause.

Hard or stony stools
Passing out of hard stools is also another symptom of chronic constipation in children. Especially when this comes out in minute quantity after spending a lot of time sitting on the bowl.

Feeling an obstruction
If you suspect constipation in your child, then you should ask him if he feels any obstruction in his stomach. This may be in form of a pain at a point or a feeling of stools being blocked at a particular point in the stomach.

Feeling bloated
If your child is feeling bloated and at the same time passing out stools Infrequently and being unable to eat because he feels filled, you should start treatment for constipation.

Urinary Incontinence
As a result of the bloated stomach, the trapped feces may press against the child’s urinary tract resulting in pain when passing out urine. This pressing of the stomach on the urinary tract may also result in the daytime or nighttime bedwetting called urinary incontinence.

Pain in the Lower abdomen
Chronic constipation often results in severe pain in the lower abdomen which often results in discomfort. The pain will come in excruciating levels and then disappear for a few minutes or longer and then return again. It moves from one part of the stomach to the other and should not be confused with other abdominal pains which may be caused by other health issues. Generally, if your child is feeling bloated, unable to eat and having severe stomach cramps, then he may be suffering from chronic constipation.

How To Prevent Chronic Constipation In Children

Giving your child a non-constipating diet is the best way to prevent chronic constipation. If constipation even ever occurs in your child, the diet is still the best way to relieve it.
Generally, for babies below 12 months who are still Breastfeeding, it is harder for them to become constipated. However, always make sure the child takes in enough fluid in form of breast milk and when making a formula for your baby, ensure you add enough water to it.

For children who are 12 months and older, constipation can easily become a problem and as a parent or a caretaker, you should take active steps to prevent it as much as possible.
Ensure your child is taking in enough fluids especially during hot weather as the body tends to lose more water from the body during this period which often results in the hardening of stools in the intestines.
Add high fiber to your child’s diets. Foods containing Fibre helps to soften your child’s stools and facilitate more bowel movement. Always ensure your child gets a cup of fruit or vegetables every day as both are quite rich in fiber and guaranteed to help facilitate regular bowel movement.
Limit low fiber foods such as cheese, cream, meat, milk etc in your child’s meal and incorporate more foods like brown rice, beans bran flakes and so on which are rich in fiber in your child’s meal.

How To Treat Constipation In Children

Constipation like all other health issues is better prevented than cured. Maintaining a healthy lifestyle of exercise, a diet rich in fires and good toilet habits is the best way to keep constipation out of your child’s life.